Felipe Oliveira Baptista, who was formerly Lacoste’s head of design, debuted his first collection for Kenzo at Paris Fashion Week. According to reports it was received well, if not with a lot of enthusiasm. The Mainichi commented:

Though it was not a triumph, the Portuguese-born Oliveira Baptista — who had previously revived Lacoste — put out a solid and saleable collection of men’s and women’s designs that successfully pushed the house toward a focused and minimalist mood.

The review by the New York Times was similar. Read more at The Times or The Mainichi.

This week Lacoste are focusing their promotion efforts on their Heritage Collection, which they describe as “chic with a twist.”  You can see the pieces at the Lacoste Store.

Lacoste has named Louise Trotter as their new creative director. Her appointment marks the first time a woman has sat at the creative helm of the French sportswear brand, which is celebrating its 85th anniversary this year.

She succeeds Felipe Oliveira Baptista, who exited the brand in May after an eight year tenure, leaving an in-house team to design the brand’s Spring/Summer 2019 collection. Trotter’s debut collection for the house will be Autumn/Winter 2019.

“Her visionary approach on lines and materials, as well as her expertise in creating highly technical pieces will be real assets to strengthen the positioning of our collections,” Thierry Guibert, president of the Lacoste Group, said in a statement.

“For 85 years, the modernity of Lacoste style lies in this singular fusion of sport and fashion,” Trotter said. “I am proud to contribute to the writing of a new chapter in its history.” 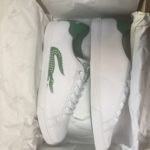 Lacoste Live Studio has teamed up with Agi & Sam, the new mavens of menswear, for a capsule collection that’s made for a contemporary lifestyle. Inspired as much by Russian modernism as the Lacoste sporting DNA, these highly adaptable pieces shift easily from office to evening without breaking stride. Stylish with a good sense of humour, these are clothes for those that aren’t afraid to turn heads. See more at http://www.lacoste.com/gb/lemagazine-editors-agi-and-sam.html

French designer Jean-Paul Goude unveiled a new unique Lacoste crocodile logo for his collaboration with Lacoste. “It was an invitation, a real carte blanche. It was Jean-Paul Goude who was to express his vision, to make decisions, [and] give his interpretation of the crocodile,” wrote creative director Felipe Oliveira Baptista on Instagram, about the collection and logo.