André Gillier (December 11, 1882 – May 16th, 1935), the little-known co-founder of Lacoste fashion, was a French textile manufacturer. His full name was Louis Émile André Gillier, and he was born in Troyes, France, a town which “dominated the knitwear production industry in France for more than a century, manufacturing items such as stockings, socks and undergarments.” In the early 1900s, Troyes’ textile manufacturing was dominated by twenty families, of which the Gillier family was one of the top five (the others were the Valton, Poron, Vitoux and Lebocey families).(1)

André Gillier was a graduate of the École Polytechnique, and, in 1908, became the manager of the family knitwear company Établissements Gillier which had been founded in 1825. During his management tenure, he acquired the nickname  “the industrial philanthropist” for his progressive salary policies, which included the introduction of the first paid holidays for workers in France. Ironically, despite his philanthropic reputation, Gillier was also a pioneer in the creation of a new system of distributed rural workshops in the 1920s, which tended to subvert the new eight-hour work day established after the war. According to the historian Helen Chenut:

A number of milliners with large capital, such as Andre Gillier, established satellite workshops and warehouses in the Aube. [This system] afforded an employer specific advantages. First of all, “he had no fears of labor conflicts from scattered workers, as he did from a collective workforce,” as historian Julien Ricommard observed in 1934.(2) 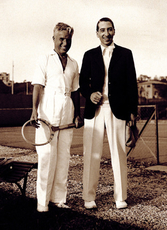 In addition to being a philanthropist, Gillier was also a great innovator in the fashion industry. In 1929, he created JIL, the first branded men’s underwear and introduced a brief with both an elastic waistband and a side-opening fly.(4) In 1930, he also patented an adjustable waistband for men’s briefs.(5) JIL is still a popular brand in France, although it is owned by a Chinese company now.

Gillier is best known, though, for partnering with René Lacoste to create the Lacoste brand. André met the tennis player while looking to buy a Hispano-Suiza car from René’s father Jean-Jules (an executive at the company). As an expert in breathable, loose-knit fabric, André Gillier was the perfect collaborator for Lacoste in designing the first polo shirt. Together they created the famous piqué cotton used in the original Lacoste shirts that is still manufactured in Troyes today.

Gillier died at the age of 52 on May 16th, 1935. The Gillier family is still active in French fashion with Thierry Gillier, the founder of the luxury brand Zadig & Voltaire Brand being a notable example.(6)

There is still an Avenue Andre Gillier in Troyes, and there was also a hospital named after him in that city that was in existence through World War Two.