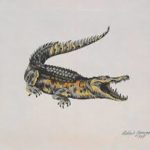 The Lacoste Group is currently a division of the Swiss Company Maus Freres. It has annual sales of over two billion euros and sells two Lacoste products every second. Currently it has over ten thousand employees in one hundred and twenty countries. In those countries, Lacoste has over ten thousand wholesalers and 1,200 boutiques.(1). However, it was not alway this large a company.

The Founding of Lacoste

The famous French Tennis Player René Lacoste founded The Lacoste Company, officially known as La Chemise Lacoste, in 1933 with André Gillier, the owner and president of the largest French knitwear manufacturing firm at the time. Their first product was the revolutionary tennis shirt Lacoste had designed and worn on the tennis courts with the crocodile logo embroidered on the chest. The production version was dubbed the L.12.12 where L stands for Lacoste, 1 because it was unique, 2 for the factory code for short sleeved, and 12, because the twelfth prototype was selected. The shirt was made with a fabric known as petit pique.  Petit is French for small, while Pique refers to “a weaving style, normally used with cotton yarn, which is characterized by raised parallel cords or geometric designs in the fabric” (2).

Although the company has claimed that this is the first example of a brand name appearing on the outside of an article of clothing, the “Jantzen girl” logo appeared on the outside of Jantzen Knitting Mills’ swimsuits as early as 1921. In addition to tennis shirts, Lacoste produced shirts for golf and sailing. The original Lacoste slogan was “Attention au crocodile… il n’y a qu’une CHEMISE LACOSTE.”

In 1951, the company began to expand as it branched from “tennis white” and introduced colored shirts. In 1953, David Crystal, the owner of Izod, bought 50% of the rights to market Lacoste in America, and advertised them as “the status symbol of the competent sportsman,”as Izod/Lacoste. This link lasted until 1993, and has led to a lot of brand confusion in the United States. Ironically, Vincent Draddy, who was head of Crystal at the time, admitted in an interview in 1977, that “at the time I considered not bothering with the alligator symbol.”(3) Almost immediately after it’s introduction, it began to be worn by “weekend athletes like Dwight Eisenhower, Bob Hope and John Wayne.”(4) The fact that it was sold at Brooks Brothers until the late 1960’s also helped give an “upper-class” aura to the brand, and led to it becoming a mainstay of the “preppy wardrobe.”

In 1963, Bernard Lacoste took over the management of the company from his father René.  At that time, around 300,000 Lacoste products were sold annually, but significant company growth was seen under Bernard’s management. The company also began to introduce other products into their line including shorts, perfume, optical and sunglasses, tennis shoes, deck shoes, walking shoes, watches, and various leather goods. In particular, their introduction of a perfume for men in 1968 was very innovative.

In 1971, Lacoste began their partnership with the Roland-Garros French Open. This partnership has continued down until today, and marked the beginning of Lacoste’s marketing partnership with professional tennis that has reached new heights in the twenty-first century.

The Peak of Prep 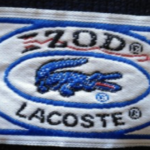 The Lacoste brand reached its height of popularity in the US during the late 1970s and became the signature 1980s “preppy” wardrobe item, even being mentioned in Lisa Birnbach’s Official Preppy Handbook of 1980. In the 1980s, the “preppy” look became mainstream, with many nationwide department stores featuring separate “Izod/Lacoste” shops, with jackets, sweaters and a wide variety of other apparel. During this period annual sales reached $150 million for the shirts alone. At that time, In the United States, Izod and Lacoste were often used interchangeably, because Lacoste shirts were still branded as Izod Lacoste under Izod’s license for sale in the U.S. In 1985, Lacoste also ventured into footwear with the release of its now iconic M85 sneaker.

The “preppy” trend cooled in the late 1980s and the combined brand became overexposed. while the polo shirt market was also saturated with knock-off replicas. As a result, in the U.S., the brands were split again with Lacoste moving upmarket in an attempt to recapture its “elite” status, and Izod was re-introduced as mid-range apparel. While this initially helped sales, the U.S. Licensee still went bankrupt, and in 1993, sold they sold their 50% share of Lacoste back to Lacoste, who thus regained exclusive U.S. rights to distribute shirts under its own brand.

The brand overexposure  of the 1980s continued to weigh on Lacoste’s sales in the United States throughout the 1990s.  In France, meanwhile, the brand suffered through what has been called a “dark decade” of sales. This drop in sales has been blamed by one scholar upon the popularity of the brand among French urban youth in the banlieues which hurt Lacoste’s upscale image.(5)

Brand Resurgence in the 2000s

Bernard Lacoste became seriously ill in early 2005, which led him to transfer the presidency of Lacoste to his younger brother and close collaborator for many years, Michel Lacoste. Bernard died in Paris on March 21, 2006. That same year the Lacoste Foundation was founded. The foundation supports community projects that, through sport, come to the aid of vulnerable young people. Its programs focus on both golf and tennis. Michel Lacoste served as President until 2008, and it is currently chaired by Lacoste Beryl Hamilton, Rene’s granddaughter.

Since 2006, the brand has also launched numerous limited editions of its famous polo. Designers Tom Dixon, Michael Young, the magazine Visionaire, the Campana brothers, Li Xiaofeng, and Jonathan Adler have all participated.

In 2010, Felipe Baptiste Oliveira became the creative director of Lacoste, a post he would hold for eight years.

The End of Family Ownership

In November, 2012, Lacoste was sold to the Swiss family-held group Maus Frères, which already held 35 percent of Lacoste capital via its subsidiary Devanlay, in a deal which valued Lacoste at 1 billion euros. The deal followed a family feud over the management of the brand which pitted Michel Lacoste against his daughter, Sophie Lacoste-Dournel, who had been named non-executive chairman in September, 2012. At the time of the deal, Lacoste-Dournel said she and family members had decided to sell  “with great sadness.” The new owner, Maue Frères describes itself as:

A Swiss family enterprise spanning over a century, four continents and four generations of the Maus and Nordmann clans. In November 1902, department store owner Leon Nordmann with close friends, brothers Ernest and Henri Maus (mercantile and hosiery wholesalers) formed a partnership and opened their first venture in Luzern. The department store specialised in textiles, notions and knitwear … Today, Maus Frères SA is run with the same astute business flair of the enterprise’s founders. Succeeding generations of Maus and Nordmann heirs have parlayed the chain’s modest beginnings into a conglomerate of well-known retail brands and store chains in Switzerland and worldwide.

In early 2018, Novac Djokovic debuted as the new face of Lacoste under the slogan “The New Crocodile.”  And, in October 2018, Lacoste appointed Louise Trotter, the first female creative director in the firm’s history.

As part of a new focus on “street style,” Lacoste has increasingly been launching collaboration with other fashion houses such as Concepts and Mastermind JAPAN and numerous rappers. You can see more on this trend on our Collaborations Page.

In 2020, in addition to dealing with Covid-19,  Lacoste was accused of using forced Uighur labor to produce some of its products. In response, Lacoste pledged to stop using those suppliers. For full coverage of this see our Forced Labor Category Page.

Fusalp – In 2013, Sophie and Phillipe Lacoste continued the family’s involvement in fashion by buying the storied French company Fusalp.