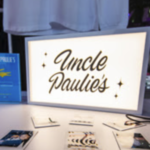 Lacoste has released a clothing line in collaboration with Uncle Paulie’s Deli in Los Angeles. The collection will only be available in Lacoste’s Melrose Place store at 8481 Melrose Place. Here’s how Lacoste describes the collection:

According to Tennis Now, the French tennis pro Fiona Ferro has signed an endorsement deal with Lacoste:

“Lacoste was my first partner and the first brand that believed in me when I was 10 years old,” Ferro said. “Today I am proud to be able to wear the crocodile on the world tour again. It’s a brand that suits me perfectly: I’m combative on the courts, I like to take risks and it’s this boldness and tenacity that can sometimes make the difference during a match.”

Ferro is currently ranked #43 in the world. Read more at Tennis Now.

This is one of my favorite male fragrances….
I wear it each & every day….😉😉 pic.twitter.com/l8uM019QDs

Whether that is the kind of endorsement Lacoste wants is another question. Although, they probably enjoy it more than having a mass murderer wear their shirts throughout his trial.

Lacoste has been connected with tennis since its founding, but it has renewed its promotional emphasis on the sport in the last ten years.  A key part of this promotional strategy has been Lacoste’s promotional contracts with pro tennis players. The most famous of their current stars is Novak Djokovic, but they have also signed rising stars like Daniil Medvedev. And, now, Lacoste has announced it’s re-signed Medvedev:

“Lacoste is proud to announce the renewal of the contract with rising tennis star Daniil Medvedev until 2026. In the essence of the brand’s founder, it is his elegance of play and his spirit that Lacoste wishes to transmit through the extension of his contract.”

Fashion Reverie has more details on this story stating that Lacoste sent a message to the AFP saying:

“[Lacoste] would like to make clear that, when we associate our corporate image to a brand ambassador, the idea behind the operation is to open up new horizons for both parties. This is not what is currently happening in France with some of these [ambassadors], and we deeply regret this.”

The Jakarta Post reports that Lacoste has cut ties with rappers Moha La Squale and Romeo Elvis over accusations of sexual assault:

French clothing brand Lacoste has ended its collaboration with rappers Moha La Squale and Romeo Elvis, the company said Friday after both men were accused of sexual assault.

Moha La Squale became the subject of a police investigation earlier this month on allegations of raping, threatening or forcibly confining several women.

The retailer had worked with the 25-year-old hip hop star since the release of his hugely popular debut album Bendero in 2018 but said in a statement sent to AFP that it had ended its relationship with him months before the allegations came to light.

They also cut ties with French rapper Romeo Elvis, 27 who apologised in early September for “inappropriately” touching someone. The confession came after he was accused of sexual assault on social media.  As Explica reports:

“Values ​​that no longer correspond to Lacoste’s image.” This is what the crocodile brand has just clarified, announcing that it had ceased all collaboration with Romeo Elvis. The Belgian rapper admitted to having sexually assaulted a woman on September 9, 2020. Despite his public apologies – which did not convince everyone – the young man has just lost his contract with Lacoste.

Read more details in the Jakarta Post story. Or, for more coverage see the following stories in the Malysian Insight or the Gulf Times.