As the Covid-19 crisis drags on and on and on, Lacoste keeps expanding their selection of masks in their mask store. 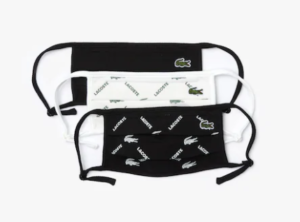 As Lacoste puts it, “A new essential for the day-to-day. These masks in washable cotton ensure protection for all. No matter where you’re heading.”  And, for each mask sold, Lacoste donates $3.50 to the Lacoste Fund to “support its social solidarity actions for a more responsible future.”  See more at the Lacoste Mask Store.

The Lacoste L.12.12 Face masks are back in stock, and available at the Lacoste store. This new version has an American flag crocodile logo like the 4th of July Polo Shirt.

If you remember my previous posts, these masks sold out quickly last time, so if you want one, buy it now!

A Lacoste loving blogger on Chicago Now wrote a post questioning the idea of fifty dollar Lacoste facemasks. However, the next day he had to write a new post announcing they had sold out.  I guess most people didn’t agree that fifty dollars for three masks was too much. That crocodile logo doesn’t come for free, you know. See Chicago Now for more details.

Novak Djokovic And two other Lacoste tennis stars thanked COVID-19 workers in an Instagram post that announced that all the revenue from a new polo shirt called the “Merci Polo” would be donated to partners fighting COVID-19 including the Red Cross and Red Crescent. The “Merci Polo” has a red heart embroidered around the Lacoste Logo, and can be bought starting on June 1, 2020. See the Instagram post below:

Merci ❤️ In honor of volunteers on the front line, @lacoste is donating the entire sales from the L12.12 Merci Polo to partners including the International Federation of Red Cross and Red Crescent Societies around the world. 🙏🏼 Thank you @tguibert70 @lacoste

According to the Real Deal which covers New York City real estate issue, Lacoste is attempting to renegotiate its retail leases in the United States:

Earlier this month, Lacoste USA’s chief financial officer Karine Sansot-Vincent sent a letter to its landlords announcing that it would seek to renegotiate leases as reducing costs would be “vital” to its “ability to be a viable company in the future.”

The letter, seen by The Real Deal, notes that the company has retained restructuring counsel at law firm Arent Fox and real estate advisory firm Keen-Summit Capital Partners to lead the restructuring of its leases with landlords across the country.

In the letter, Sansot-Vincent wrote that due to Covid-19 closures, “The existing retail business model is no longer sustainable. The essential purpose of our retail leases has been totally frustrated.”

Read more at the Real Deal.