As the Ralph Lauren site puts it:

An American style standard since 1972, the Polo shirt has been imitated but never matched. Over the decades, Ralph Lauren has reimagined his signature style in a wide array of colors and fits, yet all retain the quality and attention to detail of the iconic original.

Although it is available in synthetic fabrics now, at the time of the polo shirt’s launch, Ralph Lauren was reportedly adamant about the superiority of cotton polo shirts and “open about his love for the patina of a well-loved garment, something that polyester couldn’t really offer.” This focus was reiterated in the Polo Ralph Lauren’s launch tagline “it gets better with age.”(1)

By the 1980s the brand was going head-to-head with Lacoste. As one observer put it, “The 1980’s became the decade of the polo-shirt as Lacoste and Ralph Lauren battled for the cash of Americans coast to coast.”(2). By the middle of the decade, in the United States, the Ralph Lauren polo shirt had equal status with Lacoste, although it had much less success in Europe.

Lacoste has released a new “Made in France” collection.  According to the company:

“Inspired by our archives, the Made in France collection
combines elegance and respect for the environment.
All pieces are crafted from organic cotton pique grown
with minimal pesticides. Bet on its graphic design
to enjoy summer in style.“

It certainly has some interesting multi-colored pieces with an almost tie-dye like effect. 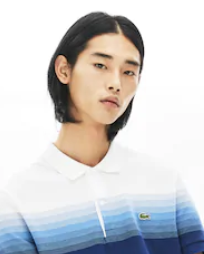 Check it out on the Lacoste Store.

I just picked up a new Lacoste Original Polo Shirt with the new American Flag version of the Lacoste Crocodile Logo. I picked a black version with initials on the sleeve. On sale it was only $98.  The shirt is also available with multiple country’s flags on the logo. Check it out at the Lacoste store.

Lacoste and Izod have not been connected brands since the early nineteen-nineties, but apparently the brand confusion persists to this day among some people. In a recent story on the release of  former reality television star Jorge Nava, The Daily Mail reported that he was “wearing a plain white Izod Lacoste t-shirt.”

The picture accompanying the article makes it clear that he’s wearing a white, crew neck, Lacoste t-shirt similar to the one shown below: 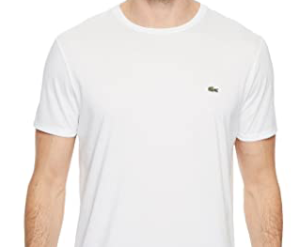 To see the picture, go to the story on The Daily Mail. To better understand the relationship between Izod and Lacoste, see History of Lacoste. Meanwhile, let’s hope it won’t take another thirty years before the brands are no longer confused.

Lacoste continues to come out with variations on their classic polo shirt. One of the latest ones is the Heritage Badge polo shirt.  This shirt has a different Lacoste badge on the front of the shirt in place of the crocodile: 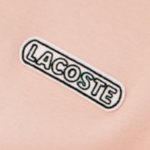 However, don’t be alarmed, the classic crocodile logo appears on the back of the shirt centered just below the collar:

I’m definitely picking one up soon.

Remember, many of the Lacoste items sold on EBay and other auction sites are counterfeit, so it’s important to know how to tell whether the Lacoste shirt you are about to buy is real or counterfeit.