Lacoste and Shoe Palace held a raucous pool party at the Encore Beach Club in Las Vegas last Sunday. DJ Diplo performed for their vendors while wearing Lacoste sliders. This party is part of Lacoste’s push to raise their profile in the United States in response to continuing strong demand for Lacfoste products. Footwear News reported:

The brand aligned with the Encore Beach Club by purchasing various cabanas behind the DJ booth as the venue. The setting had Shoe Palace and Lacoste branded towels, fans and lip balms — and guests were treated to free Lacoste slides — available at Shoe Palace — and Lacoste hats.

You can see a gallery of pictures from the party at Footwear News.

Lacoste previewed its new ad campaign, with the tag line “Life is a Beautiful Sport,” at a party held last Friday as part of Paris men’s fashion week. The campaign premiers on French television on February 7 the same day as the opening ceremony of the Winter Olympics in Sochi, because French athletes will be wearing outfits designed by Lacoste during the ceremony. 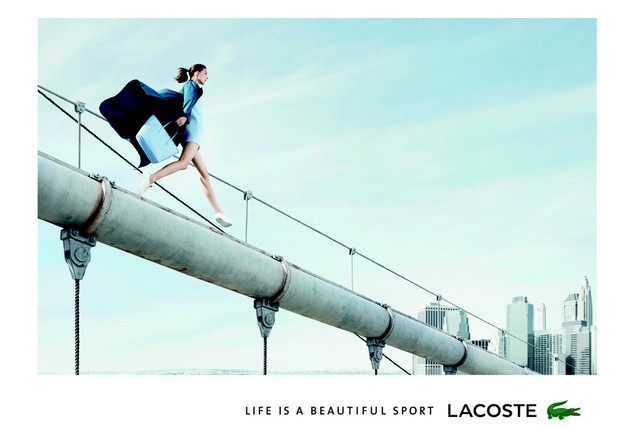 You can read more details about the campaign launch at Women’s Wear Daily.

So, officially Lacoste’s new tagline is “Life is a Beautiful Sport,” but on Lacoste’s Twitter feed it appears to be “2014 is Beautiful, or even “Live Beautifully.” Those are all very different things.  See the tweet below:

2014 is Beautiful. Tune in Feb 7th for our new campaign & film. Experience the celebration: http://t.co/Eedc51xxNm pic.twitter.com/yGa4Pp6Qaq 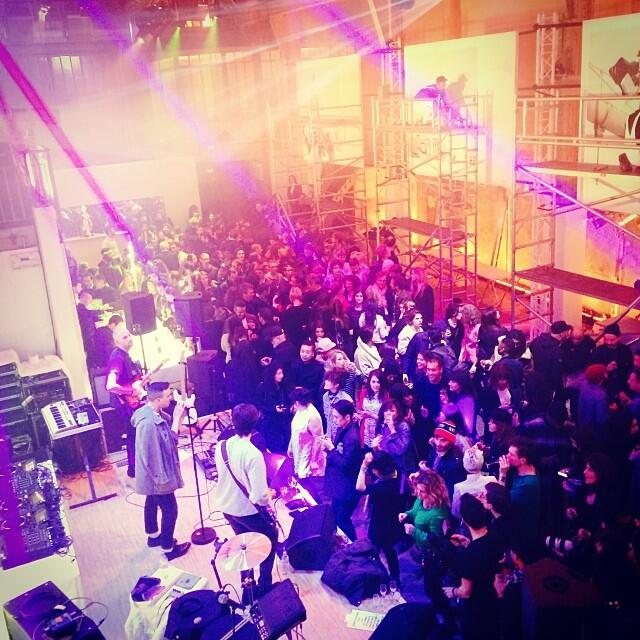 As part of its 80th anniversary celebration, Lacoste is unveiling a unique “cubist” brand show in Manila. It will be on display at the Shangri-La Plazas East Atrium from January 10-12 and January 14-16, 2014. According to Business World Weekender, the display consists of three cubes containing photos and artifacts from the company’s history:

The first cube showcases the iconic polo shirt, with a carefully curated collection of polos over the years, including the Holiday Collector’s Series, where each year since 2006, the brand features guest artists to reimagine the classic polo. A film loop tell the story of the iconic L.12.12 polo shirt, the brand’s evolution through the decades, and the Polo of the Future.

The second cube contains a cabinet of Crocodile Curiosities: the various shapes and sizes, colors and contexts that the Lacoste crocodile logo has adopted and adapted to over the decades during its natural evolution.

The third cube houses a collection of images from the brand archives with film clips of current Creative Director Felipe Oliveira Baptista and Design Director Christophe Pillet. Outside the cube, a window showcases tennis dresses from the 1970s when the brand started seriously producing women’s sportswear.

I’m hoping the display comes to California some time, so I can see it, myself.

The New York Post has a great gallery from the Lacoste Spring 2014 fashion show. You can see it here. My feelings are pretty mixed about the 2014 line, but I will cover that in more detail later.  For now, I will just note that The Examiner called the Spring 2014 line “Sheer delights from Lacoste,” which is play on the number of sheer fabrics used.  As the examiner noted:

Portuguese Baptista does French founder René Lacoste’s legacy justice in this collection which offers up feminine creations featuring sheer, gossamer like paneling with opaque sections to preserve modesty in everything from suits to tunic dresses.

Sadly, I don’t think the average person is going to be wearing these unless they get a lot less sheer.