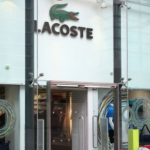 According to Fashion United UK, Lacoste has confirmed the appointment of Jamie Givens as their new Chief Executive for the UK and Ireland:

Givens, who joins Lacoste from Levi’s, where he has spent 8 years in various senior positions in sales and marketing, has been tasked with accelerating the growth of the UK and Ireland business, whilst further strengthening Lacoste premium casual wear positioning, said the brand in a statement.

Lacoste added that Givens brings with him a “solid brand development expertise across various markets and channels,” as he has previously held both regional and global responsibilities across wholesale, retail and marketing for brands including Dockers, where he was commercial director for the UK, Benelux and Scandinavia, Tigi and Dim.